Brrrrrrrrrr! It’s that time of year where it’s frosty outside and toasty inside. There’s cheer in the air and a spirit of sharing at World of Liberty. It seems as though the calendar saved the
best dates for last. We can’t think of a better way to end the year than on a giving note.

Before we get to the biggest holiday of the year, there is another special day that is celebrated across the world. You have all heard of St. Nicholas, right? Well, December 6th is St. Nicholas

Day, also known as Feast Day. St. Nicholas is a real person from 4th Century Greece known to help the needy by placing coins in their shoes. His name means “bearer of gifts” and there are several stories about him bestowing gifts to children that are well behaved. When the children knew he was coming they would leave carrots for his donkey in their shoes or boots, and St. Nicholas would leave sweets, fruit, nuts, and coins inside of their shoes in return.  Many parts of this worldly tradition are represented in our modern day Christmas celebrations. For instance, this is where the tradition of hanging your stockings originated. This day is meant to remember the kindness and giving nature of Saint Nicholas rather than focus on what you have received, be grateful for what you have been given.

We are very blessed in America, but December 7th reminds us of a day “that will live in infamy.” Can you name the President that spoke those famous words? That would be Franklin D. Roosevelt in 1941, in response to the surprise attacks from Japan

on the naval base at Pearl Harbor inHawaii. Over 350 Japanese fighter planes bombed Pearl Harbor early that morning, upon which America was forced to declare their entrance into World War II. Eight battleships were damaged, 4 sunk, in efforts to expand the Empire of Japan. The USS Arizona was the only battleship unable to be raised and is memorialized forever underwater off the shore of Oahu. You can visit the site of this historic attack and the museum in the USS Missouri. Even though the 7th is not an official federal holiday, we will always remember and honor the thousands of lives lost in the fight that day.

On a lighter note, let’s talk about the Festival of Lights known as Hanukkah. This 8 day long Jewish celebration can start as early as November depending on the Hebrew calendar for that given

year. Each day an additional candle is lit on the 9 branched menorah, representing the 8 days and nights the oil burned on what was supposed to be only a day’s worth of oil. This miracle took place after the successful Maccabean revolt and rededication of the Temple in Jerusalem. Truly a miracle to celebrate!  Hanukkah is full of tradition such as reciting three blessings before lighting the candles each night. It is also customary to play a game of dreidel after the candles are lit. Playing dreidel represents the games the Jews would play to disguise the fact that they had gathered to read the Torah which has been outlawed back in 2nd century BC.  The soldiers would think they were gambling rather than learning. Can you imagine having to hide the fact that you were learning? Take the opportunity to find a dreidel of your own and play at home. You might also  want to enjoy foods made in oil such as latkes and doughnuts as they do traditionally. Sounds yummy right? It’s all done to remember the importance of oil all those centuries ago. If you aren’t Jewish yourself, perhaps you can join in the festivities with a friend and experience the wonder that is Hanukkah.

One of the newest holidays in the month of December, full of culture and community, is Kwanzaa. It was first celebrated in 1966 as a specifically African-American holiday that starts on

December 26th to January 1st. It was created by Maulana Karenga to honor African heritage. Each of the 7 days of the holiday represent a core principle. Unity, Self-Determination, Responsibility, Cooperative Economics, Purpose, Creativity, and Faith. Every day of Kwanzaa you can discuss what these principles mean in your everyday life and their importance. It’s great culmination of food and gift-giving. World of Liberty thinks Kwanzaa is fantastic addition to creating community and enjoying the abundance this season brings.

That brings us to the biggest holiday of the year, Christmas. December 25th is the day Christians celebrate the birth of Jesus. They celebrate by attending church on Christmas Eve and enjoying the retelling of the Christmas Story through the display of a nativity. This was the original reason for Christmas over 2000 years ago. Over the years 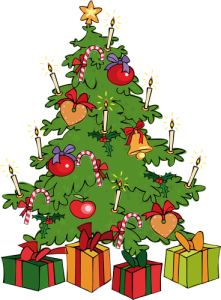 traditions have been added to what we know today as Christmas, which brings us back to St. Nicholas. Remember him? Even though he is celebrated on December 6th in the rest of the world, in America we have celebrate the legend of St. Nick with Santa Clause on the 25th. He is indeed the gift giver as children well know. And just like St. Nicholas, Santa Clause only rewards kids that have been good all year. While St. Nicholas would leave a stick in the shoe of the bad children for their parents to punish them with, Santa Clause is known for leaving a lump of coal to those that are naughty. In the end, it’s all about being kind to one another and being on your best behavior. Instead of focusing on what you will receive this Christmas, try doing something for others. Make an ornament for your best friend. Create a Christmas card for your parents. Go caroling to spread cheer in your neighborhood. There’s so many wonderful ways to celebrate Christmas!

No matter what you believe in, this month is all about celebration with family and friends. So gather together and get festive. Put up a tree and decorate. Light up your home with candles with the help and supervision of an adult of course.

Make your favorite food and cookies. And most importantly, share with those around you. There’s nothing quite like seeing your loved ones smile because of something you did for them. Enjoy the rest of 2015 and let there be peace and joy around you this season.

It’s that time, again! 😂⁠ We hope you all have a wonderful weekend!
World of Liberty celebrates Black History Month!⁠
Liberty and her friends are making paper snowflakes! You can make snowflakes, too! Ask an adult to help you follow the instructions below. ❄️⁠
Today, let's remember and honor the six million Jewish victims of the Holocaust and millions of other victims of Nazi Germany’s genocidal policies, ⁠
Today is Opposite Day and Liberty gets to teach the class! All students are wearing their clothes inside out and they will have dessert before dinner. 🤪 What will you do for Opposite Day?⁠
What can you do to make someone's day better?⁠