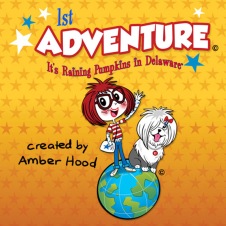 Pumpkins Lead the Way to a Spooky Discovery!

“Next adventure: Delaware! The first colony to become a state,” exclaims Liberty. Liberty, Ellie, Georgie and Truman travel to

explore and learn about Delaware in World of Liberty’s first app, It’s Raining Pumpkins in Delaware. When Georgie the bald eagle flies into a sky full of pumpkins, he leads them to their first country connection–a sister city! The sister city for Wilmington, Delaware, is located on the other side of the Atlantic Ocean: Kalmar, Sweden. There, they learn about some of Sweden’s history and how it is connected to America.

Liberty: the state of being free

Check out the whole cast on our Meet the Actors page!

Everybody who does something good, important, and valuable deserves a day in their honor. Teachers certainly are among the most deserving!⁠
Today is National Taco Day! Tacos are a Mexican dish made of fried tortillas, seasoned meat, and your favorite toppings.⁠
Our apps feature a Read To Me option letting your little ones follow along with the story.⁠
It was so windy, Georgie and Ellie were blown away! 🌪️⁠
Happy National Pancake Day from World of Liberty! 🥞⁠
Here's a Friday Funny! 🍋⁠